Resolution No. 2023-01, approved January 3, 2023 by the City Council, places the following question on the April 4, 2023 Consolidated Election ballot:

What is Home Rule?

There are 1,300 municipal corporations (cities, towns, and villages) in the State of Illinois.  Eighty-three percent of those entities are organized and existing in accordance with an arcane concept dating back to the 1800s known as “Dillon’s Rule.”   These 1,080 municipalities derive their powers and rights wholly from the State of Illinois General Assembly.   Simply, these non-home rule units of local government may only exercise powers for which express authority is granted by state law.  From circuit courts to the Illinois Supreme Court, a number of rulings have held there are NO inherent rights or powers at the local level of government except those explicitly given by the state.  The City of Columbia is currently a non-home rule unit of local government.

"except as limited by this Section, a home rule unit may exercise any power and perform any function pertaining to its government and affairs including, but not limited to, the power to regulate for the protection of public health, safety, morals and welfare; to license; to tax; and to incur debt.”

These home-rule communities are able to exercise any power and perform any function unless expressly prohibited by state law.

The City of Columbia is governed by an 8-member City Council, comprised of 2 representatives elected to staggered, 4-year terms from each of the City’s 4 Wards.  The City Council is led by a Mayor elected “at-large” (or from anywhere within the City) to a 4-year term of office.  The Mayor and City Council serve at the level of government most responsive (and accountable) to residents.  However, as noted above, Columbia is classified as a “Non-Home Rule” unit of local government.  This means the State Legislature in Springfield, NOT local elected officials, have the greatest impact on governing Columbia.  Non-Home Rule cities are subject to ALL State legislation and mandates (including those carrying certain costs to implement/enforce, with no offsetting funds from the State).  Furthermore, the Mayor and City Council are only able to exercise powers explicitly permitted by the Illinois Compiled Statutes (Illinois State Law).

Home Rule communities may be more flexible in finding local solutions to local issues and are not as burdened by state-imposed mandates and regulations.  This means the individuals Columbians elect to fill the Offices of Mayor and Aldermen assume actual responsibility for City government.

How Can Columbia Become a Home Rule Municipality?

Home rule status can be achieved in one of two ways: (1) a municipality automatically achieves home rule status when its population exceeds 25,000 residents. If the municipality’s population drops below this threshold, it continues to be home rule, but the municipal clerk is required to certify a question of retaining home rule authority for submission to the voters at the next general election; and (2) communities with fewer than 25,001 residents can become home rule by passing a local referendum.

How Will Home Rule Help Columbia?

The City of Columbia has been fortunate to secure funding through grants for a number of capital projects in recent years, including Main Street Streetscape (Phases 2 & 3), the Bolm-Schuhkraft Connector Trail, and Quarry Road Phase 1 and Phase 2- which included the roundabout.  In fact, since 2015, more than $9.7 million has been spent improving infrastructure throughout the City.  Of that amount, $5,475,500 or 56% has been paid through grants.  Between 2023-25, there are an additional 8 infrastructure projects programmed, totaling $5,541,000.  Of this amount, the City has already secured $2,559,000 in funding through grants, and has applied for an additional $1 million through State programs.

Grants are becoming more competitive in nature, and there is no guarantee alternative funding of this nature will always be available for future projects.

Additionally, there are community needs beyond infrastructure detailed above:

While the City's utility needs may be addressed through user rate increases, when compared to 43 other municipal water/sewer utilities in Southern Illinois, an April 2022 study found Columbia's rates are, on average, 11.89% lower than comparable entities.  The City Council intends to minimize any cost increases on Columbia's property owners.

As demonstrated through its actions, the City Council strives to be fiscally responsible stewards of public tax dollars.  However, the uncertainty of the long-term availability of grants, as well as the magnitude of projects on the horizon pose significant management challenges.  Home rule enables the City to access additional revenue streams not solely derived from residents and property owners.

What Other Municipalities are Home Rule?

In the Metro St. Louis area, Home Rule units include: 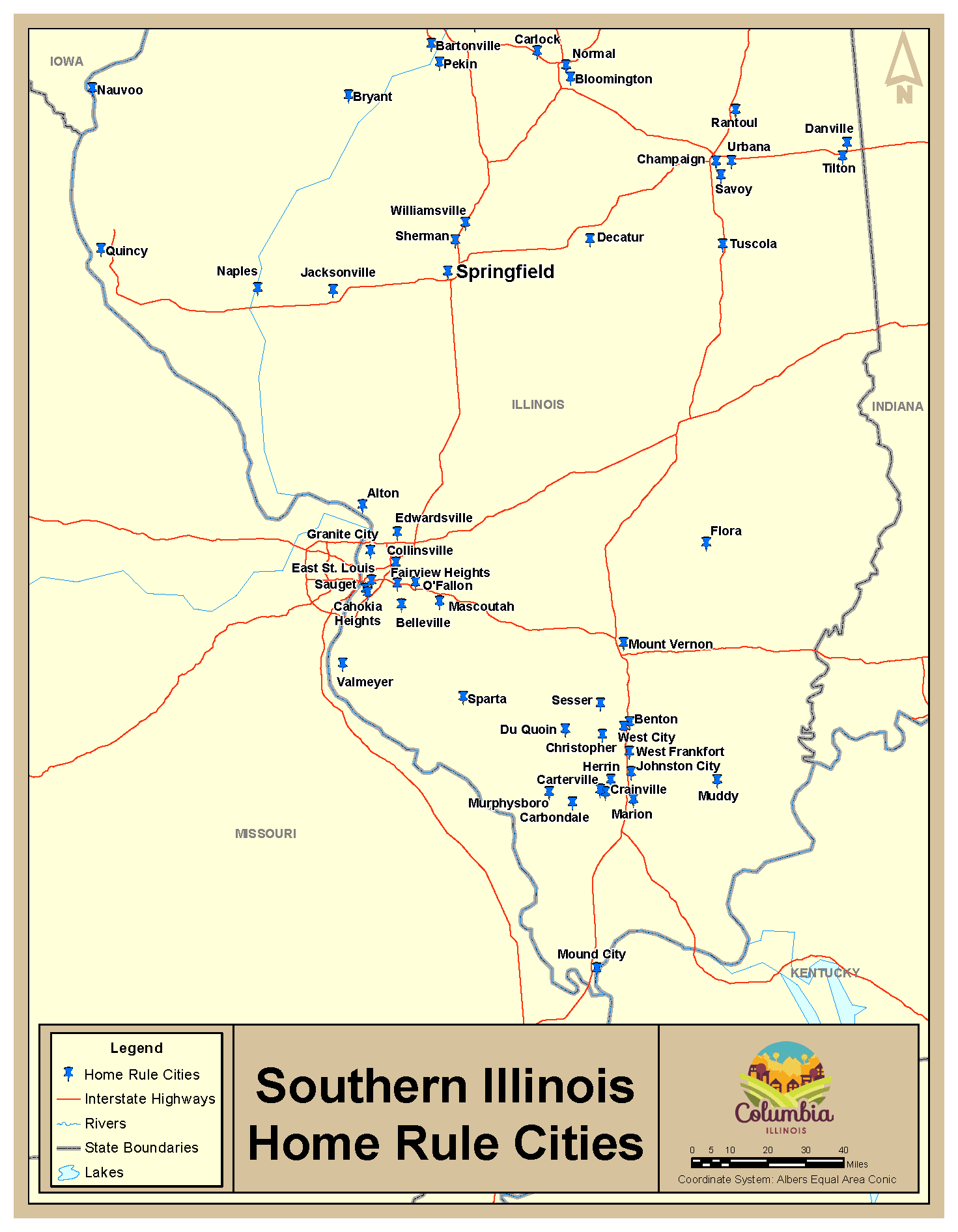 How Have Other Municipalities Used Home Rule?

Other initiatives enacted by home rule communities include:

What Are Disadvantages to Achieving Home Rule Status?

Opponents to home rule cite many of the advantages as disadvantages.  Typically, home rule municipalities have broad taxing and regulation authority, including the ability to increase property taxes without a referendum, to issue an unlimited amount of debt, to create new taxes and fees, and to regulate property.

The ability to increase property taxes without a referendum.  The City of Columbia already has this authority.  While many non-home rule municipalities are subject to the Property Tax Extension Limitation Law (PTELL) which limits the ability to increase property taxes beyond 5% or the increase in the consumer price index (whichever is less), the City of Columbia is not subject to this as it is situated in multiple counties.   Even with this ability, the City’s property tax rate has decreased 5 of the previous 6 years.

To issue an unlimited amount of debt.  The City is subject to a “debt cap” of 8.625% of the value of the taxable property within the City.  Based Tax Year 2021, this amount is $28,947,708.  This statutory cap does not apply to those instruments (or bonds) issued with an alternate revenue source pledged for repayment (other than property taxes).  The City’s Series 2015, and Series 2020 Bonds (the only active bonds issued by the City) both fall into the latter category, and are not counted toward the City’s debt limit.

Furthermore, while home rule communities are not subject to the debt cap, and may exceed 20-year limit on indebtedness instruments, home rule municipalities must maintain appropriate debt limits in order to preserve bond ratings, and retain an economic position favorable to prospective bond buyers.

To create new taxes and fees.  The City currently must seek voter approval to impose a non-home rule sales tax (in 0.25% increments, up to 1%).   However, the City is able to impose any fee directly related to offsetting costs of administering various programs and/or licenses.

To regulate property.  Non-home rule municipalities are currently able to implement inspection programs triggered by change of occupancy, and other situations.  Columbia has already implemented such processes, and has the current authority to adopt any building/property maintenance codes felt appropriate.

Other questions concerning home rule vs. non-home rule pertain to the intended “tax base” of home rule tax – specifically food and beverage taxes.   While a claim that “Columbia residents may save on property taxes, but will pay at restaurants instead” is somewhat accurate (residents of Columbia are subject to taxes imposed on restaurant/bar patrons, same as non-residents), from December 2021 through November 2022, only 19.17% of visitors to all Columbia restaurants were residents of Columbia.  For all commercial properties in Columbia, 66.23% of visitors reside outside of Columbia.